COVID-19 ALERT: We are open and here to serve you during this time.

We are practicing extra precautions to protect our patients and staff. For Full details click here. 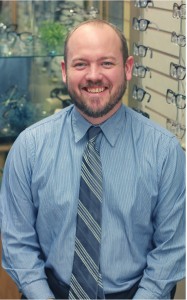 Dr. Jeremy Taylor received his Bachelor of Science in biology from Western Oregon University in Monmouth. He received his Doctor of Optometry degree from Pacific University in Forest Grove where he graduated with distinction and was awarded a four year membership to the Beta Sigma Kappa Optometric Honor Society. Dr. Jeremy also earned an Air Force scholarship while attending Pacific. Upon graduation, he entered into the Air Force as a Captain and served at Grand Forks (ND) Air Force Base. There he earned many awards including the Hoyt S. Vandenberg Award for Academic Excellence, Company Grade Optometrist of the Year, and he twice received Company Grade Officer of the Quarter. Dr. Jeremy enjoys the variety of patients he helps in the clinic’s family practice optometric setting.

Dr. Jeremy was born and raised in Florence, OR. He was active in sports including baseball, basketball, and football. He still enjoys watching sports and playing softball. His other interests include skiing, golfing, hunting, fishing, and spending time with his wife Paula and children, Sophia & Joseph.

You can schedule your next appointment with us online!